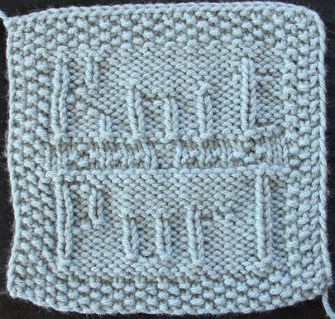 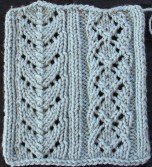 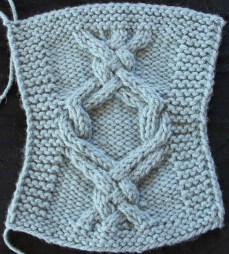 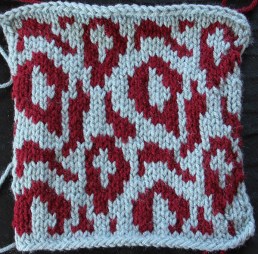 I mentioned a few days ago that I’d been knitting lace patterns from the 1880’s onto the bottom of a modern pencil skirt design. Here’s another.

This pattern is also from Weldon’s Practical Knitter — it’s the border for a “Corinthian Shawl” knitted in reverse. I really like the three-dimensional scale effect of the pattern’s alternating repeats. It’s hard to see in the picture, thanks to poor lighting and dark yarn.

Actually, that overlapping scale pattern is probably the reason it’s called Corinthian. Here’s an illustration of a Greek column, Corinthian order. It’s originally from The Universal Self Instructor, 1883. I’m borrowing it from Clip Art Etc.

The Corinthian also happens to be Georgette Heyer’s first Regency romance novel. In that genre of early 20th-century literature, Corinthian referred to a most eligible bachelor, with a stolid demeanor, an admirable physique, sympathetic eyes, a healthy sum of inherited money invested in The Funds, and calves that looked just as well out of their Hessians. I’m not sure how much the term was actually used in England during the Regency…

My radio DJ husband reorganized his massive collection of CDs, and discovered that he no longer needed this dandy metal rack. So I snagged it for my yarn. Or more accurately, a modest portion of my current yarn stash. The rest is still boxed up in the closet. I made it a point to put all the really enticing skeins out in the open, so they will remind me to knit with what I’ve got instead of buying more.

I had no idea I had so much Knit Picks stock already laying around. They keep having these great sales, and I just can’t help myself. I also unearthed a surprisingly vast quantity of lace weight yarn. I feel some collars coming on…

I’ve been working on another knitted item for my eventual clothing collection — this time it’s a skirt. The overall shape is quite modern, but the bottom boasts a knitted-on lace border adapted from a shawl pattern in Weldon’s Practical Knitter, circa 1885.

Most lace edgings are knitted lengthwise, then sewn onto the piece. It’s rare to find one knitted into the edge, and even more rare to find one knitted down, rather than up. The original directions suggested knitting a square shawl, then using double-pointed needles to pick up stitches all around the shawl to knit the edging. Those must have been some serious double-pointed needles!

The skirt turned out so well, I’ve already found another shawl edging in a later series from Weldon for variations on the theme…

Waiting for my latest yarn order to arrive at the post office is like watching for the Wells Fargo Wagon of yore.

Today, at long last, it came.

It didn’t take long for me to attack the box with a pair of scissors, revealing the soft, colorful bounty within.

You can mostly just see the sock yarn in this picture. The two on the left, “Fire Fighter” and “Rainbow” are destined for my husband’s increasingly jaunty toes. The colorway on the far right, “Tiki,” is up for grabs if he wants it too, but “Country Fair” below is all mine! Underneath, you can catch just a peek of the alpaca portion of the order. It’s for my long-awaited (or long-promised might be more accurate) Autumn/Winter collection. Trick is, don’t specify the year. So you can always say, why yes, I meant all along that this was to be Autumn/Winter 2013. Or do I mean Spring/Summer 2014…